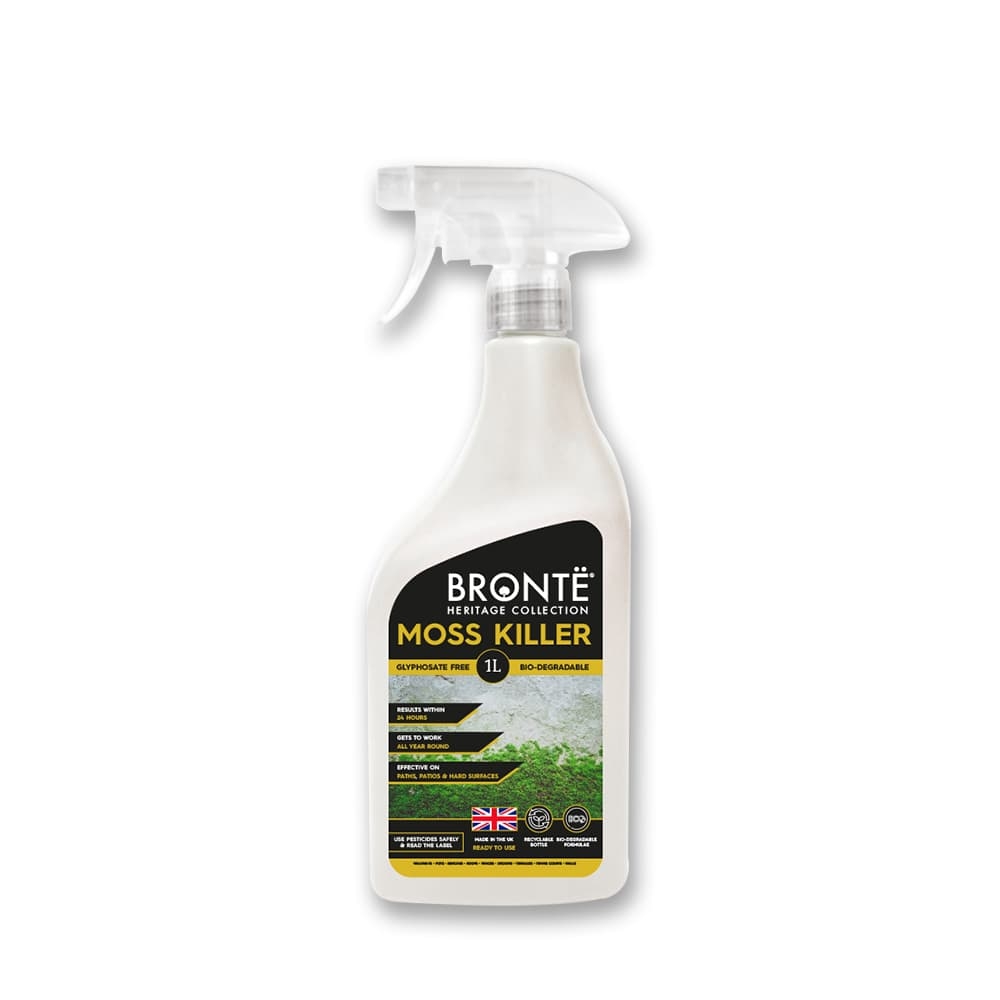 FOR USE ONLY AS AN AMATEUR MOSS KILLER.

Using a patented co-formulation of natural ingredients, the potent, ready to use treatment burns away unwanted moss and provides impeccable results on hard surfaces like paths, patios and gravel. Depending on weather conditions, results are visibly possible within 24 hours of the first usage.

Spray, walk away and let the formulae work its magic. Once dried, the biodegradable formula becomes completely safe, allowing children and pets to re-enter the area.

It is good practice to wear gloves when using this product although this is not a requirement. A minimum interval of 7 days must be observed between applications.

Apply at no more than 100ml/m2; this is usually when the moss is fully wetted but before the point at which spray solution drips from the surface. Repeat after 14 days against surviving moss, if necessary, when fresh growth is seen. Apply on a dry day when rain is not expected. Rain after spraying may wash spray from the moss leading to a poor result.

After spraying, keep people and animals off dense patches of moss until the spray has dried, often in just 15-20 minutes. However, this is not necessary for treated areas containing only occasional moss such as may be found on pathways. Use may cause some surfaces to become slippery for a short time after application. There are no residual effects in the soil. Sowing or planting may be undertaken as soon as the moss has died.

Bronte Moss Killer is a non-selective moss killer active against most soft plant tissue with which it comes in contact. Moss is controlled by covering foliage completely and evenly. Soon after use, the foliage of treated moss begins to wither and die.

Plant roots are not killed and new foliage may grow, particularly from the roots of persistent moss.

Use to achieve control of moss. Ideally use in spring and repeat as necessary over the growing season, up to a maximum of 6 applications per year

May be used to control moss growth in wide variety of situations, such as in unplanted areas of the garden, around buildings and in similar situations where moss control is required. Keep spray off vegetables, flowers, shrubs and lawns.

Ensure that garden sprayers are thoroughly clean after application as traces of Moss Killer left in the equipment can damage or destroy plants sprayed later.

Write Your Own Review